GEORGE TOWN: The state government has formed a special investigative committee to probe the landslide at the Bukit Kukus Paired Road construction site in Paya Terubong.

Chief Minister Chow Kon Yeow said preliminary reports by the Penang Island City Council (MBPP) and the Drainage and Irrigation Department showed there were elements of non-compliance in construction procedures carried out at the site.

He said the committee would be led by Deputy Chief Minister I Datuk Ahmad Zakiyuddin Abdul Rahman, with State Public Works, Utilities and Flood Mitigation Committee chairman Zairil Khir Johari as a member and an engineer from the state secretary’s office.

“Relevant agencies, contractors, sub-contractors and independent checking engineers involved in the project will be questioned,” he said during a press conference in his office at Komtar yesterday.

Chow said this was a separate investigation from the compulsory investigations carried out by the Department of Occupational Safety and Health and Construction Industry Development Board among other relevant agencies.

Once investigations are complete, Chow said the findings would be brought to the Board of Engineers Malaysia, an agency under the Works Ministry that monitors and regulates engineers.

“MBPP is not involved in the investigation as it is the project owner,” said Chow.

“On Oct 8, a team led by the Drainage and Irrigation Department found sediments in a pond and irregularities in the check dams.

“The stockpiles were not maintained well and could affect the flow of Sungai Relau during heavy rain, causing mud floods, he told reporters in Komtar yesterday.

Zairil said as per the standard operating procedure, the Ops Lumpur team issued a letter to the consultant of the project, demanding that mitigation measures be taken within 14 days.

“On Oct 12, the findings of Ops Lumpur were reported to the Erosion and Sedimentation Control Committee and the next day, an initial stop-work order was issued by the Department of Occupational Safety and Health (DOSH) following the beam collapse.

Zairil said on Sept 28, his office received a report on the concerns over hill-clearing activities in Penang from the Penang Hills Watch, and replied to them on Oct 4.

“I was concerned about the complaints, as erosion and sedimentation would indeed cause bottlenecks in the rivers downstream, especially during the rainy season.

“Claims that the complaints were not attended to are untrue. In fact, action was taken immediately,” he said adding, “The cause of the Bukit Kukus landslide must be uncovered.”

Separately, Zairil said 17 slopes in the state were under repair and RM10mil had just been approved by the state government. – The Star

GEORGE TOWN: A row of giant concrete pillars soaring high into the sky serves as a reminder of the landslide tragedy which claimed nine lives at the Bukit Kukus Paired Road project in Paya Terubong.

The tallest of them stands at about 20 storeys and remains perched between the hills where soil erosion brought down 13 containers housing the ill-fated foreign workers last Friday.

Before the Department of Occupational Safety and Health Department (DOSH) gives the all clear for the project to resume, most of the workers at the site have remained while a few moved out to look for temporary work.

A Bangladeshi worker who declined to be named was seen carrying a cardboard box containing his personal belongings to another construction site nearby.

“The boss said there is no more work here, so I contacted my friend who recommended me for another job. I will be staying at his place.

“Once this project resumes, I shall come back,” the 30-year-old said.

At the site, rubble was scattered all over the 9,290 sq m site with the 13 green containers salvaged by cranes left in a corner.

The last foreign worker to be found was 33-year-old Bangladeshi Mohamad Uzzaal. He was pinned under a container and rescuers had to dig 10m to extricate the body.

At the height of the ops, two cadaver dogs were despatched to the scene to search for bodies while two other sniffer dogs were there to locate survivors.

A small open area beside a farm further up the hill above the site where photographers and videographers camped for five days to capture the ongoing rescue operation remains cordoned off.

On Monday, the media was taken on a tour of the site after the search and rescue operation, involving over 100 rescue personnel, was called off.

The water in the stream, which looked like teh tarik on Friday, was crystal clear now after its flow on top of the hill was diverted.

Even as the ops ended and all the missing foreign workers had been located, residents living nearby raised their concerns over the project.

Technician Tan Keng Wee, 36, hoped that the project would continue since most of it had already been done, but wanted better safety measures in place at the site.

“The traffic in Paya Terubong during peak hours is chaotic due to the narrow road passing by the hills. We need the new elevated road bypass but please make sure it is safe,” he said.

“I’m worried as many landslides have happened here. Many of them could have been prevented,” he said. 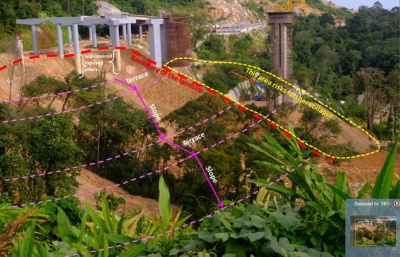 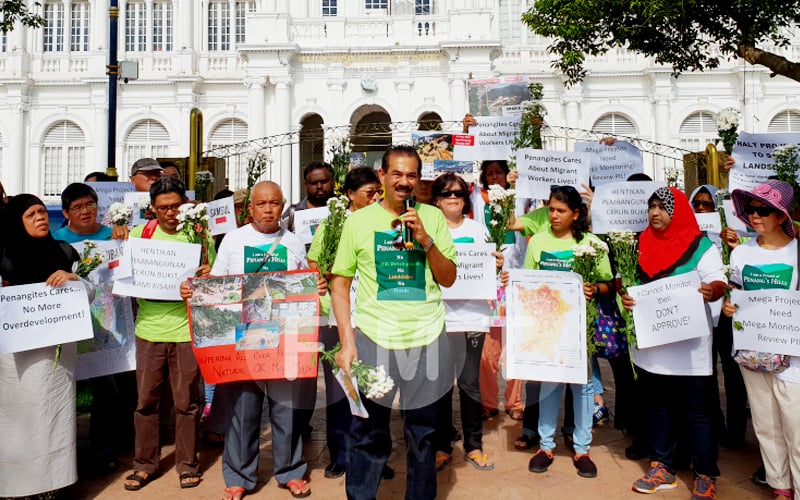 Engineering Consultant gets show-cause letter for ‘overlooking hilltop stream”, the main cause for landslide

Precarious situation: The collapsed beams along Jalan Tun Sardon which fell and broke after being knocked down. https://www.thestar.c&#8230;

IJM hill clearing & Trehaus construction damaged nearby houses since 2014 must be mitigated quickly!