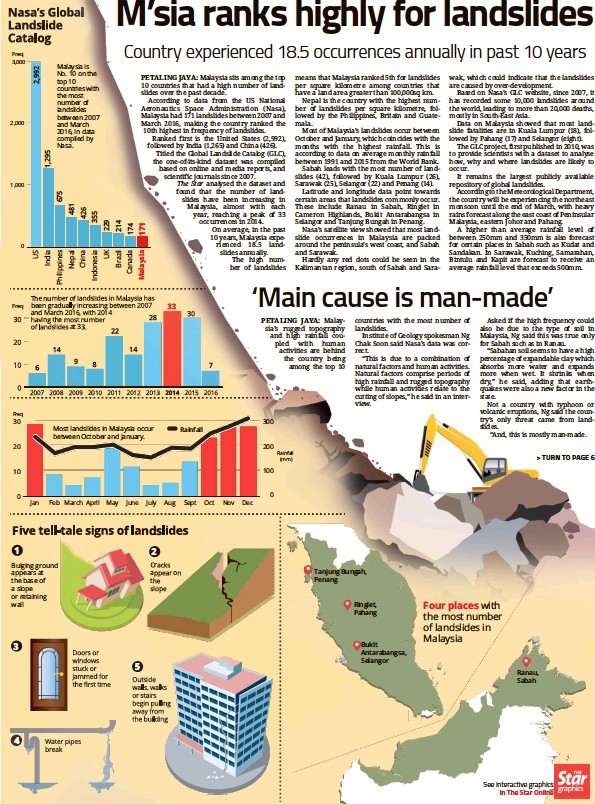 Malaysia sits among the top 10 countries that had a high number of landslides over the past decade.

According to data from the US National Aeronautics Space Administration (Nasa), Malaysia had 171 landslides between 2007 and March 2016, making the country ranked the 10th highest in frequency of landslides.

Titled the Global Landslide Catalog (GLC), the one-of-its-kind dataset was compiled based on online and media reports, and scientific journals since 2007.

The Star analysed the dataset and found that the number of landslides have been increasing in Malaysia, almost with each year, reaching a peak of 33 occurrences in 2014.

On average, in the past 10 years, Malaysia experienced 18.5 landslides annually.

The high number of landslides means that Malaysia ranked 5th for landslides per square kilometre among countries that have a land area greater than 100,000sq km.

Nepal is the country with the highest number of landslides per square kilometre, followed by the Philippines, Britain and Guate­mala.

Most of Malaysia’s landslides occur between October and January, which coincides with the months with the highest rainfall. This is according to data on average monthly rainfall between 1991 and 2015 from the World Bank.

Latitude and longitude data point towards certain areas that landslides commonly occur. These include Ranau in Sabah, Ringlet in Cameron Highlands, Bukit Antarabangsa in Selangor and Tanjung Bungah in Penang.

Nasa’s satellite view showed that most landslide occurrences in Malaysia are packed around the peninsula’s west coast, and Sabah and Sarawak.

Hardly any red dots could be seen in the Kalimantan region, south of Sabah and Sara­wak, which could indicate that the landslides are caused by over-development.

Based on Nasa’s GLC website, since 2007, it has recorded some 10,000 landslides around the world, leading to more than 20,000 deaths, mostly in South-East Asia.

Data on Malaysia showed that most landslide fatalities are in Kuala Lumpur (18), followed by Pahang (17) and Selangor (eight).

The GLC project, first published in 2010, was to provide scientists with a dataset to analyse how, why and where landslides are likely to occur.

It remains the largest publicly available repository of global landslides.

According to the Meteorological Department, the country will be experiencing the northeast monsoon until the end of March, with heavy rains forecast along the east coast of Peninsular Malaysia, eastern Johor and Pahang.

‘Main cause is man-made’

Malay­sia’s rugged topography and high rainfall coupled with human activities are behind the country being among the top 10 countries with the most number of landslides.

Asked if the high frequency could also be due to the type of soil in Malaysia, Ng said this was true only for Sabah such as in Ranau.

“Sabahan soil seems to have a high percentage of expandable clay which absorbs more water and expands more when wet. It shrinks when dry,” he said, adding that earthquakes were also a new factor in the state.

Not a country with typhoon or volcanic eruptions, Ng said the country’s only threat came from landslides.

“And, this is mostly man-made.

“Practically every major landslide in this country is linked to engineering works where slopes have been cut or built or filled with material,” he said.

To a question whether Malaysia had to change its type of development work such as slope cutting to reduce landslides, Ng said: “Apart from the coastal plains, most of our country is hilly.

“That means slope cutting is inevitable.”

He said there was a lack of in-depth understanding of the underlying factors behind landslides among “experts” in the country.

Whenever a slope failed as part of engineering works, he said it was engineers who looked into the causes of failures or what could have been overlooked, overestimated or underestimated in their calculations.

“It is unfortunate that most of these reports (into landslides) are not freely available for public scrutiny,” said Ng, adding that this made it difficult to identify the causes and to prevent similar mistakes from recurring.

He also claimed there was a lack of appropriate geological input in the study into the causes of landslides.

In many countries landslides come under the ambit of their geological survey departments.

“Malaysia is the exception where the Geoscience and Minerals Department is not playing this key role and there is a very good reason for this,” said Ng. “Landslide as a geological phenomenon is a topic under engineering geology which is itself a branch of geology.

“Landslides began to be considered a problem only after the collapse of the Highland Towers in 1993.

“So, it is relatively new in Malaysia.

“To really have a better understanding of why slopes fail, we have to get the geologists involved,” he said.

GEORGE TOWN: For the first time in the 10 years that he has stayed in his apartment near the Bukit Kukus paired road project, 62-year-old S. Santhara is worried.

That was where nine people died due to a landslide last month.

The retired fireman never had to worry about landslides because the hills behind his apartment in Paya Terubong were covered with trees.

“We knew the hills facing our block would not crumble as the trees held down the soil,” he said.

That was before the hills were cleared for the construction of the paired road project.

“As they started to clear the hills near my home last year, I worried about the stability of the slopes and whether there would be a landslide.

“Then, the Tanjung Bungah landslide occurred in October 2017 and I fear this place could be next,” he said.

On Oct 19, the landslide at the construction site for the paired road hit 12 containers that housed construction workers.

Besides the foreign workers who were killed after being buried alive, four others were injured.

The Tanjung Bungah landslide that struck the site of an affordable housing project in Lengkok Lembah Permai killed 11 workers, including a Malaysian.

A special committee, set up by the Penang state government, will begin investigations into the cause of the Nov 8 landslide at the Bukit Kukus project site in Paya Terubong.

Inquiry into the Tanjung Bungah landslide has yet to be completed.

Now, he said it was worrying whenever it rained.

“Anything can happen at any time. If I have the opportunity, I will move out,” he said at his home.

Already, he said, there was landslip on parts of the hill after the trees were cleared.

“There was erosion. It (the hill) has now been covered with sheets but we still worry when it rains.

“During rainfall, a lot of mud water wash down and drains overflow, spilling onto the road,” he said.

On the day of the landslide, K. Kalaiselvan, 43, who lives on the 18th floor of an apartment in the vicinity, heard a loud crash.

“It sounded like rocks and sand falling. Later, I realised it was a landslide.

“I am worried we could be next,” he said, adding that the slopes were bare and threatening.

“I run a coffee shop and have lived here for the past 15 years. This is my home.

“As I live on a really high floor, it is worrying whenever it rains,” he said.

Engineers: Put plan for a centralised agency into motion

Its president David Lai (pic) said IEM had proposed the setting up of such a body years earlier and hoped that the government would look into this urgently.

“We had actually put in a position paper in 2002 on the classification of slopes into four categories according to the height and angle of the slope.

“We also had an update on the policy in 2009,” he said in an interview, adding that the two papers were conveyed to the Housing and Local Government Ministry that looked into building by-laws.

“We are still actively pursuing this matter,” said Lai.

He said there should also be a slope information management system put in place to identify risky zones.

“The government must take the lead in coming up with such a system. We can give recommendations but the government is the statutory body,” said Lai.

He was responding to Nasa data that put Malaysia among the top 10 countries with the most frequent landslides in the world between 2007 and 2016.

Lai said Malaysia should learn from Hong Kong which had to deal with several landslides in the 1980s until it set up a geo office.

“From then, they started to repair the old slopes and impose new guidelines. Now, they have managed to control slope failure,” he said.

He said IEM, which had some 48,000 members, had put in a recommendation that for development on critical slopes between 25° and more than 35° angle, there should not only be a submissions engineer but also a geo-technical specialist to check on the design.

Asked if there was a need for engineers to change their designs such as cutting or fortifying the slopes, Lai said: “We actually don’t need to change.

“We just need to make sure to put in place the required safety procedures.

“We just need to get the correct people and whether all these procedures have been implemented.”

He added that enforcement was a necessity.

He said with more hillside development, there was a need now for specialised geo-technical engineers, who knew soil conditions and behaviour, and incorporate this into slope design.

PWD working to keep landslides down

The Public Works Department (PWD) has been carrying out landslide prevention works on slopes along federal and state roads beginning this year.

The works, undertaken by its Slope Engineering Branch, will go on until 2020.

Among the measures being undertaken include evaluation, danger and risk mappings, and setting up of an early warning, real-time system for landslides.

“For slopes along federal reserve and state roads, monitoring is being carried out by the district PWD via the visual method, such as site visits and inspections,” he said in an interview.

Zulkifly was responding to a question on the action taken by the department to monitor the slopes, particularly during the rainy season.

Last year, former works minister Datuk Seri Fadillah Yusof said 946 of the 16,454 slopes along federal roads in Peninsular Malaysia were classified as “very high hazard” while 1,551 others were “high hazard”.

Zulkifly concluded this with the latest technology of Light Detection and Ranging and drones.

“The Early Warning System is being developed,” he said.

Zulkifly said the EWS was being developed using monitoring techniques such as rain gauge, robotic total stations as well as the Global Navigation Satellite System.

“The equipment will continuously monitor any slope movement and the data transmitted to a server for analysis and displayed on a special website.

“Should the movement reach the danger limit, it will send a message to the officer via SMS. The officer will then decide what to do,” he said.

Forty-eight rain gauges had been installed at risky slopes.

“The real time warning limit is displayed on a special early warning website for landslides, which however is still being developed and improved on by the branch,” he said.

We don’t give our forests a hoot, says NGO

IJM hill clearing & Trehaus construction damaged nearby houses since 2014 must be mitigated quickly!