Between 1990 and 2016, thousands of terrorist attacks shook the Xinjiang Uygur Autonomous Region in northwestern China, killing large numbers of innocent people and hundreds of police officers. Horrific stabbings and bombings rocked the land once known as a commercial hub on China’s ancient Silk Road. The damage to local  communities was incalculable while stability in the region quickly deteriorated. Authorities have been trying hard to restore peace to this land. In this exclusive CGTN exposé, we show you never-before-seen footage documenting the frightening tragedies in Xinjiang and the resilience of its people. #Xinjiang #Antiterrorism China expressed strong anger and condemnation after the United States House of Representatives passed a Bill in the name of protecting human rights in the Xinjiang Uighur autonomous region.

A total of five central organs – including the Foreign Ministry, the country’s top legislative and political advisory bodies and the national anti-terrorism leading group office – expressed resolute opposition to passage of the act by the US House.

They said on Wednesday that the act is packed with groundless accusations and with the real intention of sabotaging the stability of Xinjiang and curbing China’s development.

The regional government of Xinjiang and the regional legislative and political advisory bodies said the Bill greatly hurts the feelings of the Xinjiang people and sends a serious false signal to terrorist forces.

Vice-Foreign Minister Qin Gang on Wednesday summoned William Klein, a senior official at the US embassy in China, to lodge stern representations and protests against the act, urging Washington to stop interfering in China’s domestic affairs.

Qin called on the US to immediately correct its mistake, abandon double standards on anti-terrorism issues, prevent the Bill from becoming law and stop using Xinjiang as a way to interfere in China’s domestic affairs.

He said China will respond further according to the development of the situation.

The Uighur Human Rights Policy Act of 2019 was initially submitted to the US Senate by Sen Marco Rubio on Jan 17. Despite China’s strong opposition, the act was passed in the Senate on Sept 11.

According to the Bill published on a US congressional website, the act’s purpose is to direct US resources to address what it calls gross violations of human rights in Xinjiang.

The House version of the Bill underwent several amendments, including adding clauses on imposing sanctions on certain Chinese officials and restrictions on some technology exports.

The Senate and the House will discuss and attempt to come up with a unified version before sending the Bill to US President Donald Trump, who could sign it into law, let it become law without his signature or veto it.

The Foreign Affairs Committee of the National People’s Congress, China’s top legislature, said in a statement that the act is packed with vicious attacks on the human rights situation in Xinjiang.

“It has distorted and smeared China’s efforts in fighting extremism and terrorism, ” it said.

China’s first documentary on its overall counter-terrorism efforts in Xinjiang aired Thursday night prompted wide discussions among the audience with never-before-seen scenes of terrorism, which highlighted the hefty price China has paid and the country’s resolve to eradicate terrorism.

Video and audio clips in the English-language documentary were shown for the first time as evidence of the horrible crimes wrought by terrorists in the Xinjiang Uyghur Autonomous Region. It also showed interactions between terrorists and overseas masterminds.

The nearly one hour-long documentary, “Fighting Terrorism in Xinjiang,” which was streamed on CGTN, China’s state broadcaster, has four parts. It begins with the evolution of extremism in Xinjiang, followed by the fight against terrorism. It also illustrated the interactions of terrorists and overseas forces accompanied by audio and video evidence. The documentary ends by highlighting international cooperation on counter-terrorism.

Zheng Liang, a research fellow at Guangdong-based Jinan University, who studied Xinjiang for more than 10 years, told the Global Times that he felt “shocked” after viewing the documentary.

Zheng said that previous videos on Xinjiang’s counter-terrorism were not as specific and well-edited as the Thursday one. “This newly released documentary uses quite different visual language adopted by mainstream media.”

“The authorities did not publish the video and details of terrorist attacks in Xinjiang before out of concern they may cause panic. This proves China had paid a high price in fighting terrorism, and the international community should have a clear understanding of this,” Li Wei, a counter-terrorism expert at the China Institute of Contemporary International Relations in Beijing, told the Global Times.

Li noted that the video and audio footage justify China’s Xinjiang policies in countering terrorism, including launching the vocational education and training centers, which have been highly effective in de-radicalizing and fighting extremist forces.

The beginning of the documentary features the landscape of Xinjiang, its culture and the different ethnic groups in China, including the prosperous markets and people’s peaceful and happy lives. Then the scene shifts to depicting the threat of terrorism that wrought havoc in the region.

Xinjiang has long been the main battlefield of countering terrorism. According to incomplete data, from 1990 to 2016, Xinjiang endured thousands of terrorist attacks that killed large numbers of innocent people and hundreds of police officers.

The documentary features video footage of terrorist attacks in Xinjiang, including one in Yining, Ili Kazak Autonomous Prefecture in 1997, which left seven dead and 198 injured; the Urumqi riots on July 5, 2009, which caused 197 deaths and over 1,700 injuries; and the 2013 Seriqbuya attack in Kashi, which left 15 dead and two wounded.

Terrorists also orchestrated attacks in other cities of China: ramming a car into a crowd in Tiananmen Square in 2013, and another attack that struck the Kunming railway station on March 1, 2014, that left 31 dead and 141 wounded.

Experts believe terrorism is a global threat, and no country can win the war against terrorism on its own. In the face of the threat of terrorism and extremism, Xinjiang has taken a series of measures, including establishing laws and regulations, and launching effective counter-terrorism operations.

According to media reports found by the Global Times, the Xinjiang region launched a special counter-terrorism campaign in May 2014.

Authorities have cracked down on 1,588 terrorist groups, and 12,995 terrorists and 2,052 explosive materials had been seized in Xinjiang since 2014, read a white paper on regional work on counter-terrorism, de-extremism and human rights protection in March. 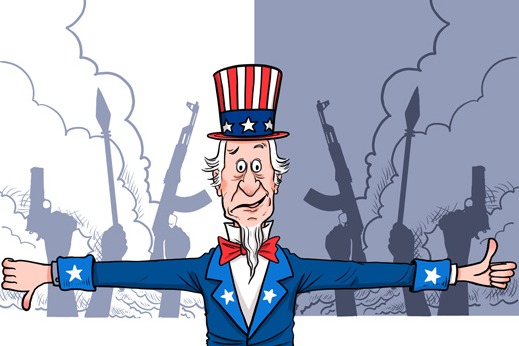 US connives with terrorists for self-interest

Enduring the hardships to revive is a lesson that Chinese already learned thousands of years ago. China’s prosperity in the future will be the best response to US provocation.

China should focus on development and exploring more common interests and values with other countries. US policies toward China are irrational in many aspects with ugly double standards. As long as China better develops and sincerely opens up, we will be capable of dealing with the US while we increasingly receive the support of the  international community. These two goals are what we should strive to gradually achieve.

« Top spammers and scammers in Malaysia by anti-spam mobile app Truecaller
The Black Hand – ETIM and Terrorism in Xinjiang, American human rights, freedom and democracy condemned »
%d bloggers like this: