US-Iran tensions, who are terrorists?

Iran designates all US forces ‘terrorists’

This is what a US-Iran war could look like

Soleimani’s burial underway in his hometown of Kerman, Iran 苏莱曼尼遗体在故乡安葬

High alert: Iran strikes back at US with missile attack at bases …

WASHINGTON (Reuters) – The United States believes there have been potentially multiple attacks on locations in Iraq, including the al Asad airbase that hosts U.S. forces, a U.S. official told Reuters on Tuesday, without providing additional information.It was unclear what other sites may have been attacked. Tensions have mounted with Iran following a U.S. drone strike on Friday that killed Iranian military commander Qassem Soleimani.

Another U.S. official, speaking on condition of anonymity, had confirmed to Reuters earlier that a rocket attack had taken place against al Asad airbase, but did not confirm other sites.

U.S. President Donald Trump visited the base in his December 2018 trip to Iraq.

Iran’s parliament designates all US forces as ‘terrorists’

Members of parliament passed the bill declaring the U.S. military and the Pentagon terrorist entities, according to Iranian state media. Under the bill, the Iranian government will also provide $220 million to the IRGC to “reinforce its defense power in vengeance for General Soleimani’s assassination,” the news agency reported, as tensions between the U.S. and Iran rise.
Iranian parliament voted to designated the U.S. military and the Pentagon terrorist organizations 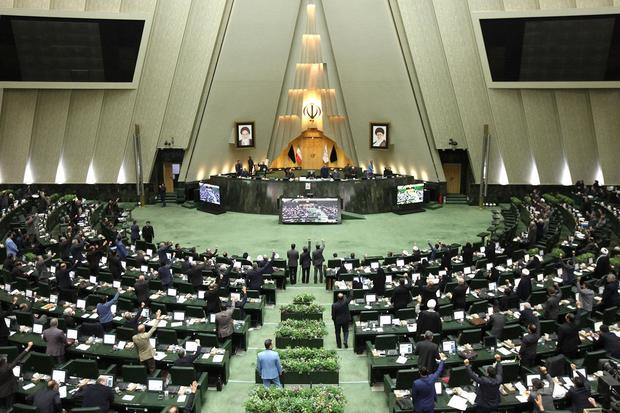 This handout picture shows Iranian lawmakers raising their hands to vote during a parliamentary session in Tehran. Iran’s parliament passed a bill designating all U.S. forces “terrorists” over the killing of a top Iranian military commander in an airstrike last week. Icana News Agency

A senior U.S. official told CBS News national security correspondent David Martin that Iran’s Supreme Leader Ayatollah Ali Khamenei has ordered a direct attack on American interests in retaliation for the airstrike that killed Soleimani, his top military commander and friend. The official said the U.S. military was “extremely concerned” that the retaliation could come quickly.

When asked by CBS News correspondent Elizabeth Palmer on Tuesday when the Iranian response would come, Iran’s Foreign Minister Mohammad Javad Zarif would only say that his country would retaliate at the time of its choosing. While a senior Iranian commander threatened at Soleimani’s funeral to “set ablaze” America’s supporters in the region, Zarif told CBS News the response would be “proportionate” and “against legitimate targets.”

Secretary of State Mike Pompeo continued leading the Trump administration’s defense of the targeted missile strike that killed Soleimani. He insisted that President Trump was right to order the killing and dismissed Iran’s claim that Soleimani was in Iraq for diplomatic purposes.

In April, the U.S. declared the Revolutionary Guard Corps as a foreign terrorist  organization, which makes it illegal for anyone to provide material support to the
group. The U.S. Defense Department used the Guard’s designation to support the strike last week that killed Soleimani, the head of Iran’s elite Quds military force and one of the most powerful figures in the Islamic Republic
Read more:

« Mobile coverage snag as uers in many areas face connectivity issue while Malaysia moves into 5G era!
US gains limited from changed China policy »
%d bloggers like this: