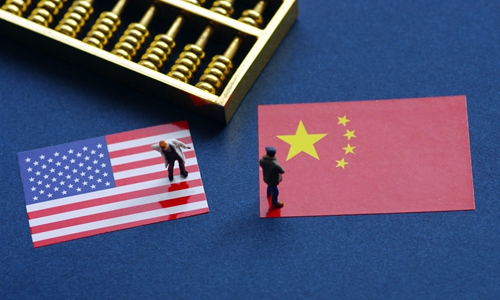 The year 2019 has been one in which US sought to reconstruct its relations with China.

First, the US reset the premise of its policies toward China. From former president Bill Clinton to Barack Obama, Washington used to consider living with a rising China conditionally as the precondition; but since Donald Trump took office, he has changed the relatively friendly premise into a hostile one. Trying to slow down China’s development and preventing the country from surpassing or even replacing the US have become the real intention of his China policy.

During 2019, the trade war launched by the US against China saw many ups and downs. The number of products on which the two sides slapped duties reached an unprecedented scale. With the escalating tech war against China, the US Commerce Department added Huawei and 70 affiliates to its “entity list.” Besides, China was listed as a currency manipulator by the US Department of Treasury.

Meanwhile, the Trump administration carried out a whole-of-government approach to compete with China and imposed all-round pressure on China.

The US has continued to meddle in Taiwan-related affairs. The Trump administration approved the sale of 66 F-16 fighters to Taiwan in August, the biggest military transaction between the US and Taiwan. Then US National Security Advisor John Bolton’s meeting with Taiwan’s National Security Council (NSC) head David Lee in the White House in May indicated the upgrade of US-Taiwan relations, which happened for the first time since 1950s.

Most seriously, the US was trying to promote Taiwan’s status as a sovereign state. In the Indo-Pacific Strategy Report issued by US Department of Defense, Taiwan was publicly listed as a country; and the Coordination Council for North American Affairs was changed into Taiwan Council for US Affairs.

In 2019, US so-called freedom of navigation operations in the South China Sea were much more aggressive. The China-proposed Belt and Road Initiative (BRI) was also besieged and smeared by the US. The US Indo-Pacific Strategy is meant to counter China’s BRI.

Additionally, the US has stepped up competition with China politically and ideologically and kept attacking China’s political system.

In terms of the issues of Xinjiang and Hong Kong, US interference was way more blatant than before. The US even passed the Hong Kong Human Rights and Democracy Act, in order to legalize its future interference in the Hong Kong issue. Moreover, the US attacked China’s governance in Xinjiang. Not only did the Ministry of Commerce impose export control over 28 Chinese business entities, but the US Department of State also announced visa restrictions against Chinese officials and their relatives. US Congress, furthermore, passed the so-called Uyghur Human Rights Policy Act, keeping up the pressure on China even more.

The series of measures the Trump administration employed to restructure the China-US relationship framework are aggressive.

The Trump administration is trying to change the way China and US interact. It believes that Washington should abandon the engagement policy and cooperation should give way to strategic competition and that the US must pressure China to make concessions. That being the case, the Trump administration has changed the approach of engagement and hedging, reduced engagement and cooperation, and increased confrontation and conflicts with China.

When some hawks within the Trump government talk about China-US competition, what they really want are confrontation and conflict. Many working-level dialogue mechanisms established during the George W. Bush and Obama administrations are no longer in operation. Now Washington resorts to trade, technological and financial wars as well as sanctions. How far can the US go in this way?

First, it depends on how much price the US is willing to pay. Competition, decoupling, confrontation, and non-cooperation all come at a price. The US-launched trade war against China has impacted US agricultural and manufacturing industries and forced consumers to pay more, while the technological war has put the US high-tech industry under risk of losing the Chinese market. Escalating military competition with China means a significant increase in US military expenditure. Restricting China-US people-to-people exchanges will also cause losses to American universities and research institutions.

In fact, with the negative effects of the Trump administration’s China policy increasingly becoming apparent, doubts within the US have grown. Although the US elites have generally reached a consensus on a tougher stance against China, they have yet to agree on how much price the US can pay.

Second, China-US relations are the result of bilateral interactions and cannot be unilaterally decided by the US. Facing heightened US pressure, China is exploring more effective ways to respond. Beijing is not afraid of competition.

Finally, the attitudes of the international community and the US allies matter. The China policy and other foreign policies of the Trump administration not only aimed at maximizing US interests, but also have the features of protectionism and unilateralism. The trade war against China has damaged global industrial and value chains, undermining the interests of other countries including US allies.

To sum up, although the US has benefited from its China policy recalibration, its gains are limited. How far will the US move to restructure its relations with China go? It hinges on the changes in US domestic politics as well as China’s will and art in wrangling with the US.

By Wu Xinbo Source:Global Times – The author is dean of the Institute of International Studies at Fudan University.
Read more:

China is not the most powerful country. But it is strong enough to defend its philosophy of seeking truth from facts. Sometimes, justice and correctness need to be proven through games and tested by time. China has the ability to create conditions for that. This is perhaps what strategic willpower means.

How should China develop in the 2020s?