HRW’s criticism of China is a lie

US-based Human Rights Watch (HRW) released its World Report 2020 on Tuesday. Kenneth Roth, executive director of HRW, said in his speech that China has launched an assault on the international human rights system.

An NGO as it is, HRW has been openly coordinating with the US on its tough China policy. The organization’s funding source and personnel structure have shown it will embed US national interests deeply into its goals. Roth once served as a US federal prosecutor. HRW’s extreme antagonism toward China results from his prejudice and political stand.

The organization’s main business is global human rights, but it seems it is unfamiliar with human rights conventions and standards under the UN system. The right to development – a human right that the UN stresses the most – is almost completely missed out in the latest HRW’s report.

People like Roth are only suitable for talking big in New York’s high society. If their interpretation of human rights is examined from the perspective of developing societies and emerging markets, people will easily find they are narrow-minded and paranoid. They are keen to show their sympathy for the lack of human rights in developing societies, but they have no idea what the most important thing is there.

It is acceptable to criticize China. But HRW has been propagating a huge lie by smearing China, a country where modern life has spread rapidly and people’s living standards have been greatly raised. HRW has been living in an abnormal atmosphere of public opinion about China.

Have people like Roth ever visited Chinese cities and spoken with ordinary Chinese families? Have they ever been to the shopping malls and streets that have sprung up all over China, and talked with ordinary Chinese people there? Have they left nightclubs and walked back to the hotel at night in China? Is China’s human rights system the worst in the world? Are they talking about human rights or the privileges of the very few followers of the US value?

The life span of the Chinese people is becoming longer. Conditions of food, clothing, housing, transportation, education, public health services and provisions for the aged have been improved. Pollution has been effectively controlled. Chinese people have become the main force of global tourism and studying abroad. China’s internet is also one of the most developed worldwide. These have formed the basis of the continuing development of China’s human rights.

China is different from the US and the West politically. Thus, China has its own characteristics in political participation and governance of public opinion. The Chinese system supports the country’s development. Our system does not threaten that of the West and should gain respect from the West.

Some extreme Western political elites have attacked China violently for geopolitical purposes. People like Roth are not really advocating the general advancement of human rights, but are following the needs of US politics. They are tarnishing the great human rights cause of mankind, and should be ashamed of it.

People like Roth should go deep into a huge society like China and really understand what is going on there and what people really care about. The likes of Roth should seriously study the world, not arrogantly represent the world.

Criticizing China for “suppressing” human rights is the card that the West has been playing for decades. This reflects the hypocrisy and deep ignorance of arrogant Western elites who cannot give an objective assessment of other countries’ situations, analysts said on Wednesday, in response to the latest report of nongovernmental organization (NGO) Human Rights Watch which deemed China as a global threat to human rights development.

In its 335-page World Report 2020, the New York-based NGO claimed that China is now a global threat to human rights. Kenneth Roth, executive director of HRW, claimed that the country is also using its “growing economic clout to silence critics and to carry out the most intense attack on the global system for enforcing human rights since that system began to emerge in the mid-20th century.”

Roth was banned from entering Hong Kong on Sunday, about a month after the HRW was sanctioned by the Chinese central government for their “horrible activities” in instigating the months-long riots in the Hong Kong Special Administrative Region (HKSAR).

The NGO, which claims it does not receive funds from the government, releases human rights reports every year, evaluating the global system for protecting human rights. However, many of its officials and members are former US federal government officials, and the NGO has been using its right to speak to export the ideological tendency, Chinese analysts said.

“To judge other countries at will by ignoring the facts is their way of doing things,” an analysts close to a government-related think tank who preferred not to be named, told the Global Times on Wednesday. Rioters set up barricades on streets to block traffic in Hong Kong on Jan. 1, 2020. (Xinhua)

The Chinese Foreign Ministry said on Wednesday that HRW’s China-related remarks, including its report, are devoid of facts and paint white as black, and that there is no need to discuss it.

“These two organizations have been viewing China from distorted views for a long time. Their China-related comments always ignore facts with no objectivity,” Geng Shuang, spokesperson of Chinese Foreign Ministry, said at a routine press conference.

“The state of the human rights situation in China is in the best of times,” he noted.

Some China-related topics HRW highlighted in its 2020 report have appeared in previous reports, including criticism over so-called repressions of Uygur people, tightening controls on freedom of expression and the erosion of HKSAR’s freedom. Also, HRW has always been enthusiastic about criticizing other countries and regions as well as paying close attention to topics on juridical fairness, racial discrimination, extortion, and confessions by torture.

Its 2020 report has also adopted the same biased way of depicting “old stories” with new arguments. For example, in the Hong Kong chapter, HRW claimed that a large number of protesters acted peacefully, but the police used excessive force by intentionally ignoring the legitimacy of police law enforcement.

This is not the first time HRW pointed its finger at other countries’ internal affairs, coming up with reports filled with biased views and false evidence. It ignored cases of police beating African-Americans to death in the US or the infamous abuse of detainees at the Guantanamo Bay detention camp, according to a letter jointly released in May 2014 by more than 130 scholars, mostly from the US, criticizing the HRW. Singapore’s Ministry of Law also refuted the NGO criticism of proposed fake news laws in 2019 in Singapore.

The letter, calling on HRW to close its revolving door to the US government, noted that many members of the HRW are former CIA agents and former US officials. The organization’s standard on human rights is in accordance with US diplomatic policies and interests, thus damaging its credibility and independence.

“It also reflects the lack of oversight of NGOs in international law. For example, what criteria does HRW use to evaluate human rights in other countries?” the analyst said, noting that it seriously undermines the joint efforts of other countries in the field of human rights. 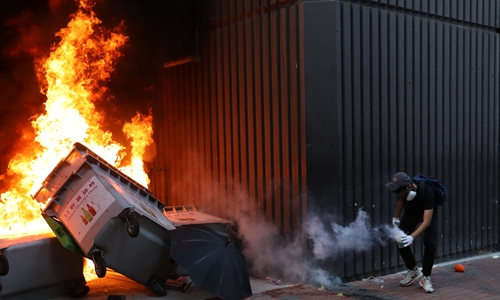 Chinese analysts also noted that the funding and membership of the NGO linked it close to the US government, although it claims to be nongovernmental, and its goal is to work for the country’s national interests.

A graduate of Yale Law School and Brown University, Roth used to serve as a federal prosecutor, whose perception of China’s human rights is embedded with hostility and political bias.

“They’ve been watching and criticizing other countries based on their understanding and idea of the West’s concept of human rights. China has its own human rights concept, formulated on our social, economic and cultural background. But the Chinese concept was often disregarded by those NGOs,” another anonymous expert told the Global Times on Wednesday.

Human rights include, first and foremost, the right to life, subsistence and development, the Xinhua News Agency said in a commentary in 2019. When HRW criticized China’s Xinjiang policy, it turned a blind eye to the region, which used to fall victim to violent terrorist attacks that has killed innocent people but has been developing into a peaceful and prosperous place.

Though these NGOs claim to be politically neutral, it is impossible for them to completely ignore the political background and stance of Western countries, He Zhipeng, a professor of international human rights and legal education at Jilin University in Northeast China, told the Global Times.

“They usually take Western culture as the basis or ideological fortress, and always stand on the basis of the Western human rights ideology to observe and criticize other countries, while China’s socio-economic and cultural background is often unheard in their investigation,” he said.

Wang Yabin contributed to the story

Inside America’s Meddling Machine: NED, the US-Funded Org Interfering in Elections Across the Globe  https://youtu.be/NzIJ25ob1aA

« Cutting-edge satellite launched by private Chinese company: GalaxySpace
Countdown to the Chinese New Year around the world for the year of the mouse »
%d bloggers like this: