End the race-based governance in Malaysia!

The recently concluded general election has emphasised the need for a new direction in political leadership. 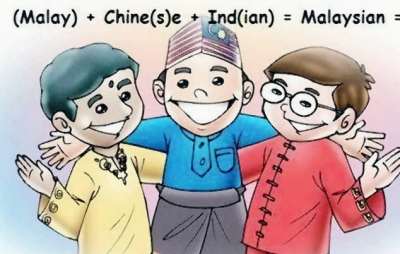 1Malaysia: A cartoon posted on Facebook that reminds us of the many races that make up the Malaysian population.

IN the aftermath of GE13, I am deeply saddened because even my childhood friends of different races and political preferences have expressed strong disagreements to a pictorial message I have shared on my Facebook page.

We had been exchanging happy thoughts and warm remarks prior to the run-up to the election.

Perhaps it was due to my recent vigorous postings of shared materials of political nature that provoked such a reaction. Perhaps there is a lesson I should learn here moderation must be the order of the day.

They have their reasons and freedom to make their statements but I hope one day, they will agree with me.

If we start to think outside our “old school” box and work hard enough, it will happen.

A non-race-based government whether from a structurally changed and re-invented Barisan Nasional or one promised by opposition parties is not impossible.

The road may be long and hard but I am willing to commit myself to it by supporting any political character who can sensibly offer this discourse. I am not one of those who believe it should have happened on May 5 or come next polling date.

We are too complicated a society to manage and the core risks involved are plentiful. A good leader will have to be wise and intelligent enough to take them on bravely.

Superficial public relations exercises will not do.

If we refuse to open up and face reality in this rapidly changing world, we may be depriving ourselves and the younger generations of better living.

Eventually everyone, including rural society, can access massive amounts of information on what they believe to be relevant and good governance expected of politicians. Driving fear into people to submit has reached the end of its game, it is now a repellent rightly or wrongly.

I am not a fan of Opposition Leader Datuk Seri Anwar Ibrahim or US president Barack Obama.

But I do believe the eventual abolition of racial discrimination and polarisation or the minimisation of both can happen if Malaysians are smart or “lucky” enough to choose leaders who will take up this challenge.

Skin colour does not matter as long as they serve all quarters of society well.

Substance, sincerity and integrity are paramount.

I grew up with the nation and I have observed how political awareness has progressed with the young. I am truly impressed by how fast Umno Youth chief Khairy Jamaluddin and PKR vice-president Nurul Izzah Anwar have matured politically over the past five years.

Although idealistic by our “old school” standards, I believe they will learn.

Almost all Malaysian voters of mature age and mind understand that change will not result from victory in an election.

Given the right leader, supporting leaders and alliances including co-operation from opposition parties, any radical change from our long-held ideology of race-based politics and governance encompassing negotiated quotas and allocations of power according to numerical racial composition would be a mammoth task.

It was the best option during its inception 56 years ago but has since undergone diminishing relevance and caused ills.

Racial polarisation and anger clearly proved its point during elections. It is scary to take note of the many dangerous minds revealed in the mainstream and social media during and after GE13.

Nobody says it is going to be smooth sailing into happiness if any political party that subscribes to a non-race-based government wins the election.

In fact, citizens should understand and I believe many do that it is going to be the start of a messy, confusing and noisy learning process for politicians as well as common folk.

But if we do not start and strive, we will never get there.

I am willing to place faith in the emerging generation after the “baby boomers” to which I belong. And they certainly have made their choices heard during this general election.

While the wealth of experience and knowledge from veterans are invaluable, it is time to let go of absolute power where and when appropriate.

This is what smart, skilful and high-worth senior leaders are made of. They should visualise happier present and future generations in a highly globalised environment and make it happen.

Upholding themselves as pillars of strength and support with integrity to nurture and groom future leaders would be crucial.

Setting or making nominal modifications to perimeters within old frameworks only acts as a stumbling block to healthy and free economic and social development.

Cosmetic touches do not constitute real change when fundamentals and core social values have already evolved cumulatively and drastically over half a century.

The perceived control and manipulation of the mainstream media by the Government disappoints many well-informed citizens who have turned to the alternative media for enlightenment.

It is a failing of the media to serve the interests of the people if there is no timely dissemination of truths on what concerns them most.

We cannot deny the fact that alternative, especially social media, can be fairly damaging to society while it has its importance. Ugly comments, false information and rumours are rife and confuse even the most level-headed people.

If we love this country, our friends and neighbours, we should switch on our conscience and let it guide us to find wisdom.

> Chen Yen Ling is a certified accountant who also dabbles in writing.

« Would DAP join BN to ensure Chinese representation in the Malaysian government?
Tap your phone’s potential with NFC technology »
%d bloggers like this: