Singapore’s economic data have gone from bad to worse this month. Exports slumped to their second-worst rate since the global financial crisis, the purchasing managers index slipped into contraction for the first time since 2016, and the economy shrank the most in almost seven years in the second quarter. 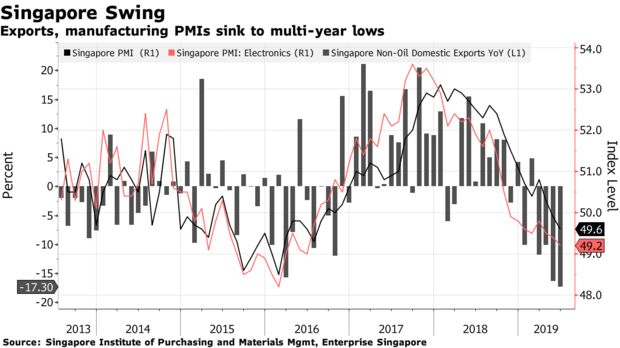 After spending much of early 2019 enjoying relative resilience, a recession
is now looming. That’s a warning shot for regional and global economies, since Singapore’s heavy reliance on trade makes it somewhat of a bellwether for the rest of Asia.

The severity of the slump may be down to trade tensions and a global slowdown, but Singapore has been grappling with longstanding economic threats that have been slowly eroding the city state’s growth potential: rapid aging, labor market shrinkage, and sluggish productivity among them. Those risks will become more acute for policy makers now.

“Any undue turbulence or prolonged stresses from the trade war are only
going to compound the challenges of all the other issues — productivity, demographics, anything else,” said Vishnu Varathan, head of economics & strategy at Mizuho Bank Ltd. in Singapore. “External demand concerns will be at the top of the list for now, because if you don’t get that one right it’s that much more difficult to solve everything else.”

Singapore remains one of the most export-reliant economies in the world, with trade equivalent to 326% of gross domestic product, according to World Bank data. That puts the city state at the center of the storm stirred up by its top two trading partners sparring
over tariffs.

The shock GDP figures earlier this month prompted some analysts to downgrade
their Singapore forecasts for the year to below 1%. The government is set to revisit its own 1.5%-2.5% range next month, but for now, it’s remaining calm, seeing no recession for the full year.

“Barring a swift rapprochement in U.S.-China trade relations, our forecast for a 0.2% year-on-year contraction in Singapore in 2019 remains on course.

The government has ample firepower to cushion the blow, but it may not be enough to avoid a recession.”

The slump is largely contained so far to manufacturing, which makes up about a fifth
of the economy, but could soon spread to other sectors such as retail and financial services. That increases the risk of job losses at a time when businesses like International Business Machines Corp. are already laying off workers and banks such as Nomura Holdings Inc. cut staff.

The number of retrenched  workers in Singapore rose to the highest in more than a year in the first quarter, though the unemployment rate has remained fairly steady at 2.2% amid a recovery in construction.

“The labor market looks to be on two tracks at the moment — there’s a weak market in the manufacturing sector but a steady one in the services sector,” said Shaun Roache, chief Asia-Pacific economist at S&P Global Ratings in Singapore. “High-frequency indicators including industrial production and trade suggest that the environment will remain challenging in manufacturing for the year.”

While those cyclical headwinds buffer the outlook, policy makers are also grappling with structural impediments to growth.

Faced with a rapidly aging population, the government has been on an aggressive campaign to re-skill its labor force and prepare workers for a postponed retirement.
The median age is set to rise to 46.8 years in 2030 from 39.7 in 2015, faster than the other top economies in Southeast Asia as well as the world as a whole, according to United Nations projections.

Tied to its rapid aging is Singapore’s productivity conundrum.

As the labor pool shrinks and gets older, the city state’s answer to the productivity challenge has been to automate and digitize. With an ambition to become a “Smart Nation,”  the government has poured money and energy into digitization projects
of all kinds, from helping seniors fine-tune smartphone skills at digital clinics to attracting financial technology giants to set up shop and test their ideas.

It’s that technological advancement, along with its world-beating infrastructure and efficiency, that continues to make Singapore attractive to businesses like Dyson Ltd., the U.K. manufacturer that picked the city state for its location to build its first electric cars. It’s also a reason why officials are confident Singapore can meet its foreign investment targets for this year.

— With assistance by Cynthia Li

« China orders US to remove ‘black hands’ from Hong Kong
Anti-corruption crusade in full force in Corporate Malaysia »
%d bloggers like this: